The Ultimate Guide to the Ivy Lee Method

The Ivy Lee Method is more than one hundred years old. It is deceptively simple, and to this day, it remains highly relevant and efficient thanks to its focus on prioritization and eliminating the irrelevant and insignificant from your daily schedule. 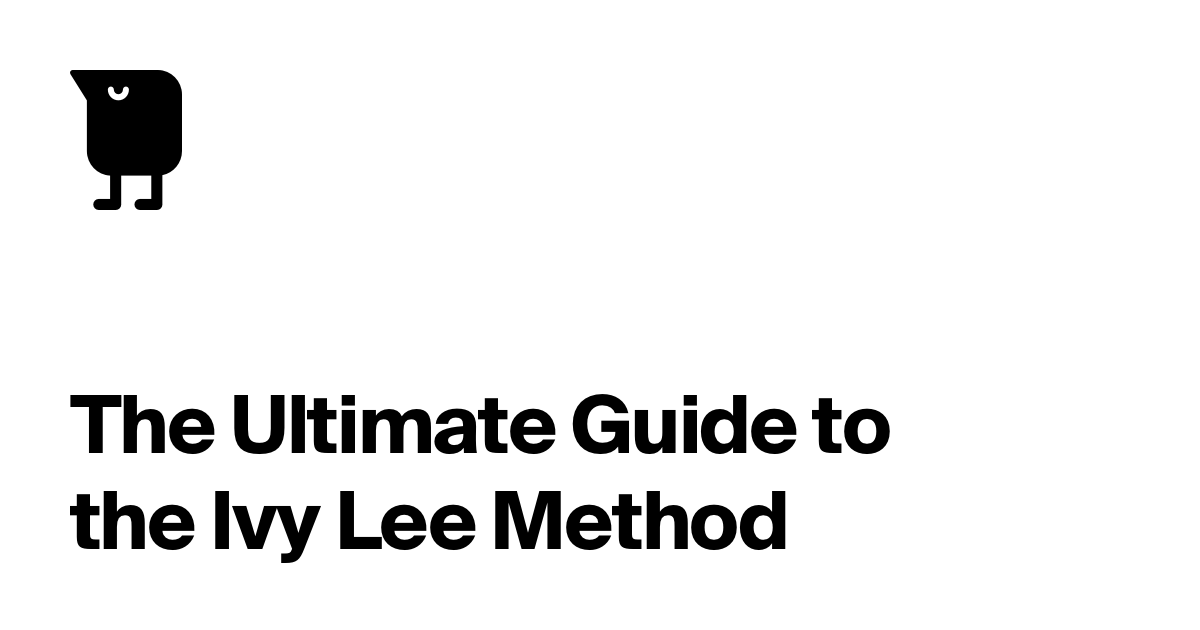 Concentrating on a small number of important tasks throughout the day leads to maximum productivity and efficiency, in contrast with multitasking, which splits your focus across multiple tasks, causing you to feel busy and productive but never achieve anything of substance.

So, what is the Ivy Lee Method?

Assign yourself no more than six important tasks per day, list them from most important to least important, and then work on and complete each one in that order. Do not begin the next task until you have fully completed the one before it. Make a list of your tasks for the next day at the end of each working day. Move any unfinished tasks to the top of tomorrow’s list of six tasks and repeat daily.

We’ve created a demonstration of the Ivy Lee Method using the Tweek calendar (below), and, with the help of some simple instructions and images, you’ll see just how easy it is to put it into practice in your life. As we’ve said before, this method is extremely simple and effective, and it consists of just four basic rules:

Find a suitable time in your day to do this because planning is a crucial element of increasing productivity. At the end of the work day or in the evening is often a perfect time to get started.

Never start the next task until you have fully completed the one before it.

Consistency helps you to concentrate on a single thing and strengthens your focus and discipline.

Move unfinished tasks to the next day, maintaining the prioritization you have set. Their priority will always be higher than that of the tasks in the new list.

Remember, you must still limit yourself to six tasks overall, even when you carry over tasks from the day before.

Repeat this process every day.

You can use any type of calendar for this method, even a paper one.

On Sunday, I made a list of six important tasks for Monday and arranged them in order of importance.

By the end of Monday, I’ve only completed the first four tasks. Therefore, the fifth and sixth tasks are carried forward to Tuesday and become the first and second tasks on Tuesday’s list.  All that’s left for me to do is fill the list with four more tasks and arrange them in order of importance.

The history of the Ivy Lee Method

In the beginning of the 20th century, Ivy Ledbetter Lee was not only one of the most influential pioneers in public relations in America, but he was also a successful businessman. He consulted for huge industrial corporations, such as Standard Oil, owned by the Rockefeller family.

In 1918, Charles Schwab was one of the wealthiest people in the world. He owned the Bethlehem Steel Corporation (the largest shipbuilding company and the second largest by steel production in the USA). In order to boost the productivity of his team, he invited Ivy Lee over for a consultation.

“Show me a way to do more,” Schwab asked Lee.
“Give me 15 minutes alone with each of your top managers,” Lee replied.

Lee sat down with each of the top managers and explained his method within 15 minutes, just as he promised. Schwab asked how much he owed Lee for his services.

“Nothing at all. But when you see the results in three months, write me a check for whatever you feel it’s worth to you,” Lee replied.

Three months later, Schwab was so satisfied with the productivity of this simple method and with the overall progress in his business that he wrote Ivy Lee a cheque for $25,000 (the equivalent of $400,000 today).

To some extent, you can also call on the ideas of a famous book 7 Habits Of Highly Effective People, where all tasks are divided into four quadrants based on the criteria of importance and urgency.

In order to become as efficient and productive as possible, you need to do things from quadrant two, the important and non-urgent tasks, as often as possible.

Do what’s most
important every day.